This Is The Fan Favorite Clip From The Carson Show, Do You Remember It

The Tonight Show is an American late-night talk show that is currently broadcasted from the NBC studios in Rockefeller Center in New York City. This show started airing on September 27, 1954, and had so many iconic tv show hosts like Steve Allen, Jack Paar, Jay Leno Conan O’Brien, Jimmy Fallon, and also Johnny Carson. This show has the 5th highest episode count of 12,001 and one of these is currently going viral! 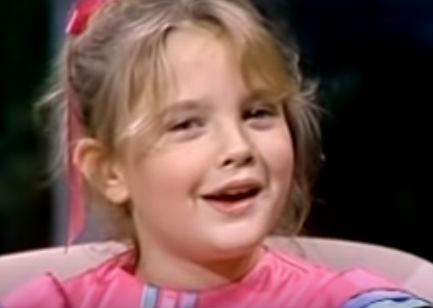 Kids are fun guests on television shows like The Tonight Show. This vintage clip of a very young Drew Barrymore on The Tonight Show how she can easily own the stage and impress not only the audience but the host as well. Just by looking at this clip we can clearly tell why Drew became one of the big names in the showbiz industry. She made a huge hit in the film industry when she starred in the movie E.

As soon as she was presented, she took the stage but she slipped and fell. Instead of being embarrassed and crying like a baby like girls her age do, Drew handled it with grace while Carson helped her up to her seat. “That’s a pretty funny entrance did you rehearse it. ” the host joked. Drew just giggled and said, “No. ” Drew was very charming as Carson was consoling her that others had slipped on the same stage before her.

She just kept smiling as she blamed what happened to her slippery shoes and the audience just laughed with her. They then discussed fashion, her visit to the dentist, and her young career as an actress. Barrymore didn’t back down. She even flaunted her fake front teeth at one point to show how she wore the device on TV while her permanent teeth were still developing in.

Carson asked her if she would be more comfortable without the fake teeth and Drew was quick to remove them and placed it on his desk which drew a lot of chuckles from the audience. She was also asked about E. T. Drew spoke proudly about Director Steven Spielberg and how she got the part when she first auditioned for Poltergeist but the director thought that she was not the right fit for the said project.

The director was right because drew was the perfect actress for his another film, E. T. Carson can’t get enough of her cuteness so he invited her to return to the show again. 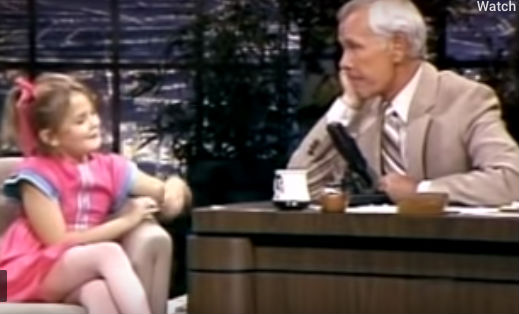 This clip has been circulating the internet once again and many have commented on how adorable Drew Barrymore was when she was a young girl. Many have noticed how focused she was during the interview. At 7 years old, she surely owned that stage like a lady! People have also commented on Carson’s interview skills. He was quick to make Drew comfortable even after that mishap during her entrance.

Drew Barrymore is now a grown woman with daughters of her own. During her interview with Ellen DeGeneres, she shared that being a mom to Olive and Frankie was definitely life-changing for her. She always thinks that she was put on this planet to be a good woman so she could raise her daughters to be good women.