Target might have gone too far with this one.

While a vast majority of us tend to just laugh at certain funny outfits that we find on the shelves at fashion stores, there are some people who have a difficulty with just shrugging it off because the message that is being sent might hit a little too close to home.

The young girl who is in this story was very offended when she saw one of the shirts that Target had decided to sell during the holiday season.

And to be honest, she is absolutely right to be offended.

The retail giant came under a little bit of scrutiny after they decided to sell a shirt which seemed to find humor in the mental illness that a lot of people seem to be facing today.

The outfit in question here was a sweater which was emblazoned with the word “Obsessive Christmas Disorder” and while it might have seemed funny and clever to the people who manufactured it, it seemed to not sit too well with people who actually suffer from “Obsessive Compulsive Disorder”

Reign Murphy is a user on Twitter who decided to ring the existence of these offensive shirts to the attention of the general public, especially those who might be suffering from an obsessive-compulsive disorder. 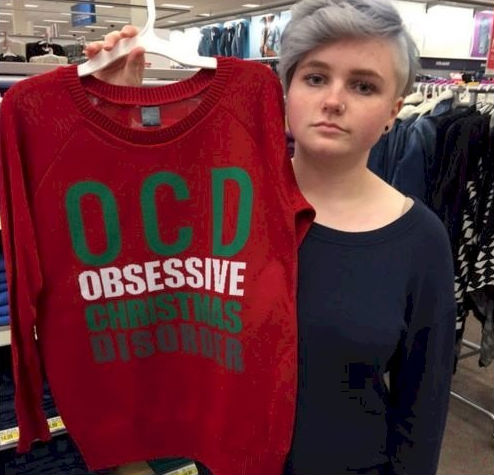 Other Twitter users agreed with Reign’s belief that the shirts represented an offensive sentiment, and a demand was immediately issued by angry shoppers that the shirt should be permanently removed from the shelves. However, Target seemed to not mind the ire of hundreds of people and the message they seemed to be sending out there, as they continued to sell the shirt in their stores and even though the shirt has been the subject of extreme criticism in the past, this didn’t seem to deter the retail giant from continuing to put them on sale.

So do you believe that Target should have listened to the criticism of these people and should have completely gotten rid of these shirts at all their stores. Or are you off the opinion that the sentiment behind the shirt was just something to be taken lightly. This is the kind of debate that will without a doubt receive some spirited conversation on every side, and most people definitely encourage that.

Each and every one of us should be willing and ready to lend a discussion to the issue of mental disorders in a more open-minded and progressive fashion, especially so that the stigma that surrounds the people who suffer from them can be done with once and for all.

As a society, it is our responsibility to band together when we see the development of issues like these, so that we can create an environment where people who suffer from mental illnesses are able to get a greater sense of freedom when it comes to letting their opinions known. At times like these, when large companies show a complete lack of care and empathy, it only goes to show us that there is still some work that we need to do before we can truly reach a point where we can do right by the people who are offended by these cases.

Mental illness is a real issue, and sufferers face a lot of struggles on a daily basis when insensitive corporations turn a deaf ear to their opinions and concerns. We should all come together to put an end to the minimization of others’ feelings.