Police Dog Refuses To Listen During Official Photo Shoot, Now They Are Famous

One Officer Levi Knach was having a hard time posing for an official photo with his K-9 partner Kenobi who quickly seized the opportunity to demand a thorough petting. The outcome was a series of hilarious photos that depicted the dog in various positions that were definitely not official. He was captured fondly licking his partner’s face and cuddling real close.

At first, the officer put on a stern face and completely ignored Kenobi’s rather hilarious antics. He was determined to get the photo shoot over as soon as he could. Kenobi, however, had something different in mind.

The black canine stubbornly decided to be uncooperative this particular morning. Kenobi refused to pose until his handler gave him the petting, scratching and rubbing he felt he deserved. Therefore, instead of sitting still beside his partner, the dog decided to sneak in some cuddles right in front of the camera.

The session was clearly backfiring, and with Kenobi’s whiskers on his face, Officer Knach could not contain himself. He burst out loud in laughter as the cameraman snapped away the hilarious moment. Kenobi had no idea what was going on. All he wanted was a good scratch behind his ears and maybe a rub on his belly.

The photo session was therefore paused so that Kenobi could get his cuddles first. He fondly gave his favorite human a thorough licking on his face. He jumped on his laps and squeezed his head below his chin to make it clear that this was his human, and his alone.

After he had been rubbed and scratched to his heart’s content, he paused nicely for the cameraman who finally managed to get a decent photo in the midst of all the dog business.

Kenobi is a K-9 who works with the Indiana Department of Natural Resources (DNR) canine unit. According to the department, he was a very hard working dog and was all serious during business. However, as Officer Levi would say, he was very playful when the two were not working. Photos showed him and his handler in a jovial mood after work.

It was also made clear that the two partners were very serious when it came to official duties. Kenobi was usually busy catching the bad guys with his partner close by, ready to arrest them. Kenobi’s story, however, is a sad one.

The pooch had been left all alone by his owners, chained up with no food. Animal handlers found him in a sorry state, and he was quickly taken to the animal shelter where he was taken care of until he was healthy again. 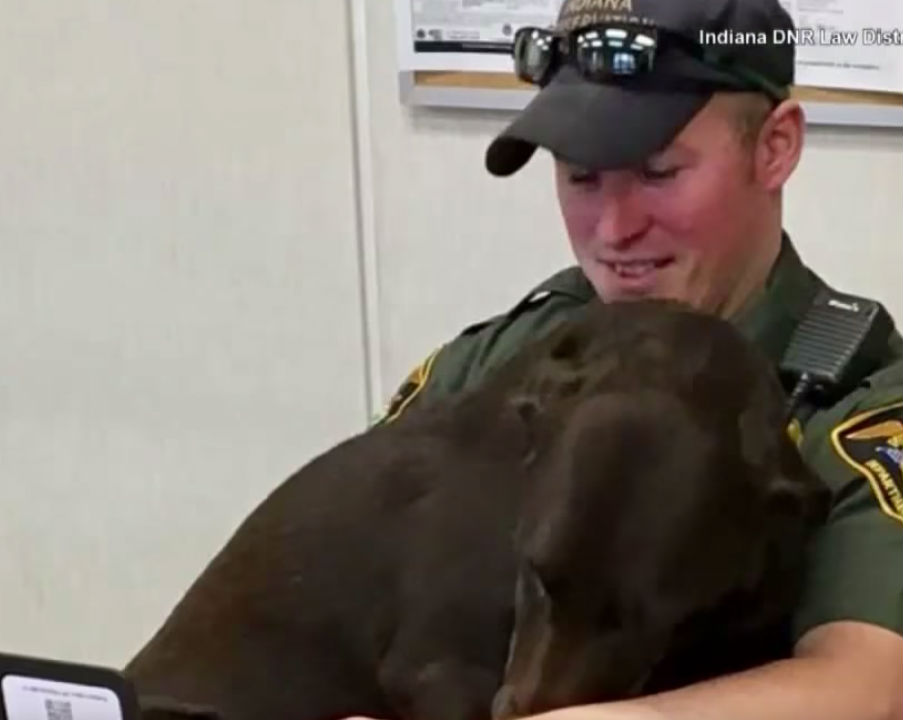 The Indiana DNR was looking for a suitable dog to train and incorporate into their canine unit. When they spotted Kenobi, they did not think twice. He was swiftly adopted by the department where he underwent extensive training. He was then put under the care of officer Knach who became his handler and partner. The two have since grown quite fond of each other.

Kenobi’s official duties include detecting fish and game violations, finding missing persons, protecting his handler, recovering evidence, and identifying and recovering invasive species. Despite all the intensive training, Kenobi is still a dog with adorable qualities such as irresistible eyes and unmatched loyalty. It was no wonder Officer Levi Knach could not resist him when he demanded a quick cuddle!