Have you ever taken a look at the tiny metal round things on your jeans and wondered just why they needed to be included when your manufacturer was making these jeans?

In truth, these round things just kind of look like they are little useless bits of metal that should have never been included in the design again after the turn of the century but in reality, it is still very easy for you to find these button-like objects on quite a lot of jeans out there.

However, as soon as you are able to understand just why these jeans have these circular its, it will be impossible for you to want to get a pair that doesn’t have them again.

Jeans have grown to become the go-to fashion essential, regardless of whether for men or women. N this day and age, it is basically impossible for you to find a single person who doesn’t own at least one pair of blue jeans.

Taking a look at history, jeans were being worn by basically everyone, from celebrities to cowboys. And although there is no denying the fact that these jeans have undergone a little bit of change over time, we can all still testify that the basic design that they have still remains pretty much the same. 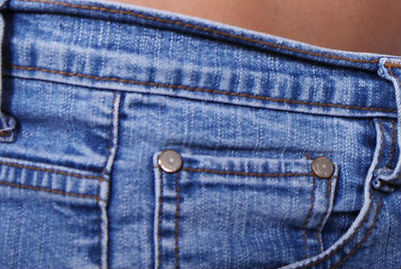 Now, for those who might not know, these metal pieces are actually known as “rivets”, and they have also actually led to the development of jeans themselves. When you take a look at the history of jeans, you will be able to see just why these rivets have been able to stand the test of time and stay on for this long.

Back in the 190s, denim was the material worn by a vast majority of physical laborers, but the problem with these denim clothes was that they fell apart easy.

There was a particular woman who got so sick of having to mend her husband’s jeans on a daily basis or having to purchase a new pair that she unintentionally made an incredible contribution to the story of fashion itself as we know it.

Jacob Davis, a local tailor, was approached by the wife of one of the town’s laborers, and she asked him if he could make a pair of work trousers out of denim that won’t easily stretch or tear. To wit, Davis put these rivets on the areas of the jeans that were known to stretch and expand the most (for instance, the lower part of the fly and the corners of pockets).

The effect of this addition was that the fabric was held together, and this greatly increased the shelf life of the denim.

As soon as word got out and everyone had heard about the modifications that Davis had made to this pair of trousers, everyone wanted the same thing. So, Davis called on the person who supplied his fabric, Levi Straus.

Both Strauss and Davis ended up getting a patent for the design of the riveted pants in 1873, and it had to take abo a hundred years for their denim design to be known by us common folk as “jeans”

So how many pair of blue jeans do you own at the moment?