Cats are by far one of the sweetest and the gentlest pets that we can have in our lives. Many of those who are not preferring the furry canines would opt for these felines. Many of us buy or adopt cats because we want them to be our pets, however, others purchase cats for other reasons.

The Humane Society stated that almost 40,000 people in the United States alone are purchasing dogs and use them in dogfighting rings. This is an alarming number and very troubling especially for dog lovers. Just imagine having your loyal fur buddies being forced to live in this kind of tragic condition is really disturbing. What we do not know about dogfighting is that this illegal sport also involves other animals.

Dogfighters throw kittens into dogfighting rings as another financial incentive!

This sick animal fight game goes where multiple kittens are added to the ring and the onlookers would bet on which cat gets killed first. Such a sad thing to learn for cat-lovers. In order for the onlookers to differentiate the kittens in the ring, the facilitators add colored dye to the paws of the cats so that each of them can be better identified while fighting for their lives while in the ring.

However, this is not an unusual case in the dark world of dogfighting. This is so prevalent that even the animal rights activists are dedicating their time and resources just to educate the public regarding this issue. 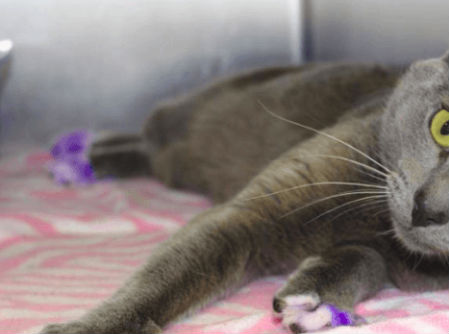 Meghan Sorbara, the founder of Naples Cat Alliance posted on Facebook, shining a light on the problem. Meghan shared a picture as part of her article a black and white cat with purple paws. She posted this along with a paragraph that explains the reasons why and also a little background of the said cat.

According to her post, the cat looks good and is very healthy but what made the cat different are its purple paws.

She said that dog fighters are using markers to color the white parts of the cats and the kittens so they would know which color to bet on. These cats are ‘color-coded’ and they are thrown to the packs of dogs. “This is cruelty at its worst,” Meghan wrote. It seemed like Mr. Purple Paws was able to escape before he even entered the ring.

The folks at Naples Cat Alliance knew that Mr. Purple Paws probably was going to be utilized as part of a dogfighting betting match. Luckily, the cat escaped and the people from the organization were able to save him.

Mr. Purple Paws now has a loving family and a forever home.

This is a very sad story but should be a reminder that these animals need us. It is our humane duty to be aware of their health and safety. The Naples Cat Alliance wants the public to be aware of the issue so that more and more animals will be saved from their tragic fate.

Have you ever come across a cat with colored paws? If you see a cat with dyed paws, bring it to the nearest shelter or better yet report the case to your animal control officer. Let us do our part in keeping these cats safe!