Smartphones are becoming more and more useful each year. From a simple text message, phone call, and internet browsing, you can now do almost everything in this small gadget. No more need for a physical camera when you can now have a good photo quality using your phone. You can also share pictures and videos online using different social media platforms.

However, we are always warned to take extra caution when sharing personal photos and videos online. What happened to this young guy will surely serve as a lesson to each one of us!

Maison Vallance’s mom asked him about the red shirt that she gave him. This 22-year-old boyfriend decided to include his girlfriend, Meghan, in the photo as soon as he found the shirt. Megan was sitting on the bed and the shirt was draped over her lap. Sure it looks like an innocent photo so he sent this to his mom. He also shared the similar photo on his Twitter account and wrote:

“I took this picture to let my Momma know I found the shirt she got me, but Meghan is too pretty not to post it”

However, these two lovebirds forgot something.

What seemed to be an innocent photo but when one of Maison’s friends noticed, it turned out to be a little scandalous!

It’s a simple yet noticeable detail in the background. But when Maison realized his mistake, it was too late. A friend named Brooke Tussey replied to Maison’s post saying:

“I’m going to regret this as soon as I ask, but the ropes…?” 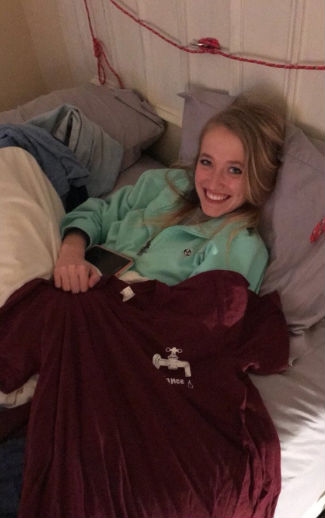 If you take a closer look at the picture, there is a long red rope behind Meghan’s head that is strung across the headboard. Maison didn’t even realize this until it was too late. He was surely freaking out just thinking that his mom would notice this tiny ‘detail’ in the background!

The photo instantly went viral but instead of getting furious, Maison just stayed calm and even poked fun at this embarrassing mistake. Even though the DIY rope apparatus was not confirmed why it was there in the first place, everybody seemed to have an idea. If you are familiar with 50 Shades of Grey, then you know what this apparatus is all about.

Maison was lucky because it seems like his family has a great sense of humor and was not embarrassed by the photo he shared. Weston Vallance shared that he told their mom about this tweet and pic and why it went viral and this is how she responded:

“Has anyone considered what Meghan’s mom will think of this?”

Still, Maison and Meghan are lucky because her mom doesn’t have social media.

Young love is fun and as they say, there’s nothing wrong if you try something new. But if in any case, your personal ‘stuff’ goes public, make sure you have a sense of humor just like Maison has and just laugh it all off. Social media can be very powerful. It has the capacity to destroy you.

This is why we always have to be extra careful, especially when posting pictures and our thoughts online. Make sure that you can handle it because it can end up going viral.