Entitled Driver Thinks She Has The Right To Cut Off 18-Wheeler, Trucker Teaches Her A Lesson

You must have heard one or two persons call truck drivers “road bullies”. But is this assessment really true. Your opinion might change after watching the video in this post below. As a driver, the stern warning to keep a safe distance from 18 wheelers when you are on the road is something you must be familiar with.

The reason for this warning is simple. They will literarily hit you if you get too close. 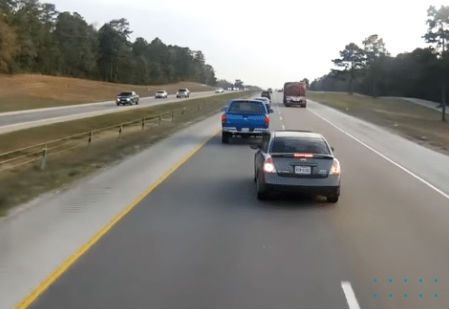 But what you probably didn’t know is that a semi-truck will most likely hit you not because it wants to, but for a number of reasons beyond the driver’s control. For one, they have a larger blind spot than regular cars.

But the biggest reason which is unknown to many is that car drivers, and not the truck drivers are the ones responsible for many of these accidents because of the incorrect decisions they make while driving close to trucks.

The Federal Motor Carrier Safety Administration stated in 2013 that more than 4,000 fatal accident involved large trucks or buses. This might sound like the statistics are in support of the accusation that truck drivers are indeed bullies. But when you discover that 72% of these accidents are caused by car drivers, you will change your mind about them.

Bad decisions like following a truck improperly, failing to make a safe lane change and over speeding are few of the factors that lead to road crashes. The video below is sufficient proof that maybe the truck drivers aren’t to blame after all.

First, you will see that there is a modest amount of space between the 18 wheeler and the truck in front of him. Everything is going on smoothly. Then the black Altima makes a switch into the same lane as the 18 wheeler. Nothing abnormal, all is well as he also keeps a safe distance.

Then this Volkswagon comes along and tries to make a switch into the empty space in front of the semi-truck. Wrong move. Space is meant to be an allowance for him to stop if he wants to. But the Volkswagen driver thinks it’s a good enough space to merge.

The truck driver is upset at what the VW guy does. You can hear him complain about the bad driver. What happens next is a collision and from the video, it is obvious who is to blame for this. By the time the Volkwagon driver realizes it, he is already trapped.

Many drivers think the moment they signal for a lane change then they can do so at wheel. This is an incorrect assumption. You can only can lanes when it is right and completely save to do so. Not even a correct signal gives you unlimited right to switch lanes.

What we also have to keep in mind is that just because you signal for a lane change, it does not give the right to change lanes. We change lanes when the time is right and safe to do so.

The Volkswagon is clearly the one to blame for this accident. Dangerous lane changes like this are what leads to many road accidents involving semis. The whole accident would have been avoided if the car driver had followed proper rules. 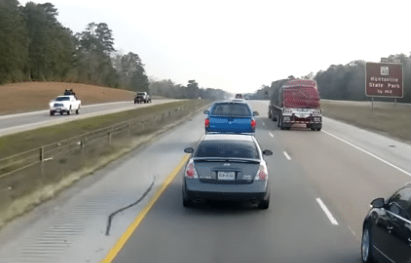 Thankfully, no one was seriously hurt by this accident. And we are lucky to have a video that teaches us an important lesson on the mistakes to avoid while driving. Changing lanes in such dangerous and getting into the “no zone” in front of semi-trucks like this can lead to accidents.

When driving beside or behind trucks always note that their blind spot is a lot larger than yours. It is also harder for them to stop in cases of emergency, hence the need to always keep a good enough distance from them. When attempting to overtake a truck, do so quickly and avoid cutting them off at all costs. Following these basic rules and others should keep you safe from trucks at all times.