Cops Investigate After Neighbors Complain Of A Foul Smell

Letting go of your prized possessions can be emotionally painful but when it gets out of control, it becomes a bad habit. There’s a reason behind why people hoard things and it can be due to a past trauma, or a very difficult experience that can lead to the need for a sense of control that has been initially stripped away from them.

Hoarding animals have been one of the most common problems where some would keep hundreds of dogs, cats, and even rabbits.

We have seen and heard plenty of horror stories about these people who have a huge number of animals up to a point where providing a safe shelter and food for these animals is almost impossible. These people have the heart and care for these animals, they just don’t have the means to support all of them.

However, when a person has a huge number of animals on their property for the purpose of making money, that’s another story that no one can ever empathize with them. 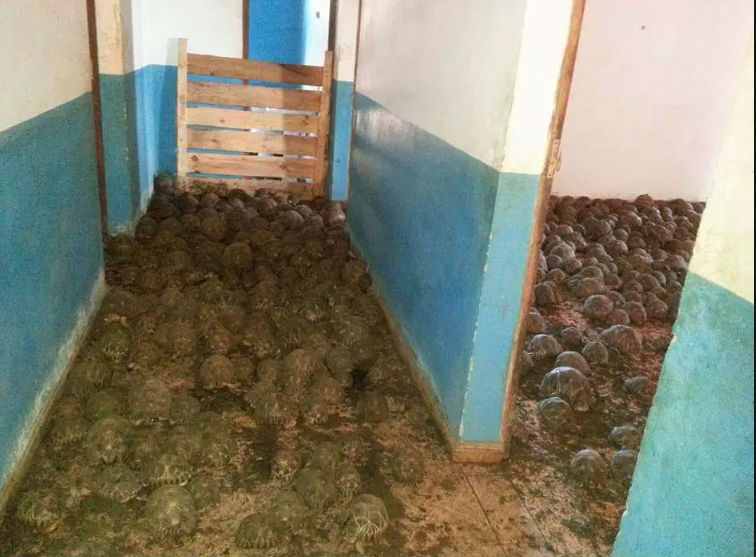 Officials were able to crack down a link as to why the tortoise from Madagascar is getting lesser by the number each year. This is listed as “critically endangered” and they are very rare and expensive. They have a very unique shell pattern which is why more people from all over the world are interested in them.

The authorities did not get any insider tip and you may wonder how they were able to find these hoarded exotic reptiles. They investigated at first until they noticed a foul odor coming from a house.

According to Soary Randrianjafizanaka, the head of the Ministry of the Environment, Ecology, and Forest, the smell was unbelievable. Randrianjafizanaka said, “It was so awful. They had tortoises in the bathroom, in the kitchen, everywhere in the house. ” Similar to other animal hoarding situations, the house where these tortoises were rescued was filthy.

It is a two-story house in Toliara, Madagascar and both stories were full of tortoises. Most of them are covered in waste and dead animals.

After the authorities did a thorough investigation of the house and what they found inside it, they were able to gather around 10,000 endangered tortoises where 9,880 were alive and 180 were dead. The two individuals who were living in the house were able just at the back of their house, burying more dead tortoises.

According to these officers, the two people that were caught and another one are believed to be linked to this illegal operation so they were arrested.

These rare and endangered tortoises were immediately taken to the rehab center just within the area and many of these exotic animals were in a really rough shape. The rehab center took care of them but still, 500 of these tortoises died. According to Randrianjafizanaka, they do not know who is behind this illegal hoarding, “But we know there’s a big boss.

” This case was not the only illegal operation for smuggling endangered species to collectors in this country and the authorities were glad that this group that has an illegal plans for these endangered species has been stopped in time and they were able to save these outrageous number of tortoises from the continuous decline of this endangered creatures.